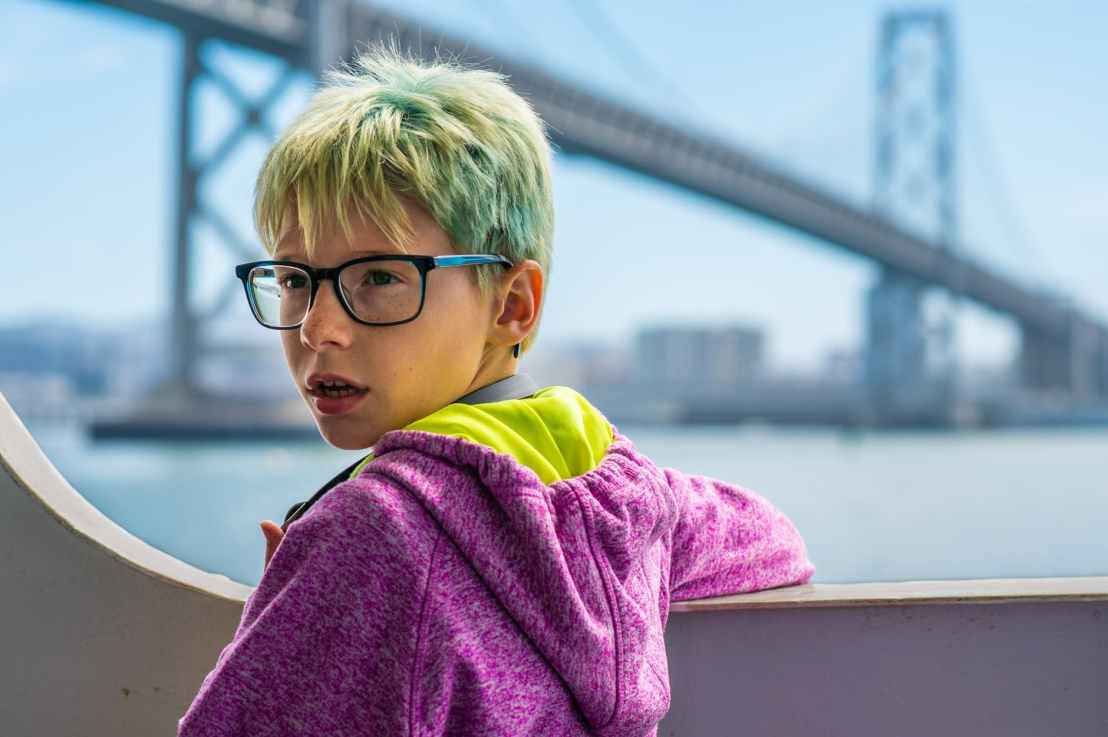 (One caveat here: I know nothing about film making, and I’m not trying to say I do in this post. I’m also not trying to assume that everything I say here will be true or happen in the movie – but they did make a trailer, and that is what is shown to the public, so that is what I will be discussing in relation to autistic-coded characters in horror films.)

Here’s the thing. I don’t like horror movies. They give me terrible nightmares usually, especially psychological thrillers, or things like Westworld or Mr. Robot, where you’re not really sure what your reality is. I was simply looking at what movies I want to go see in the next few weeks, when I stumbled upon a trailer for Prodigy. I watched said trailer. I’m not sure why. But I noticed just how much “abnormal behavior” and “abnormal development” is tied to violence/otherness/psychopathy in this trailer.

Here is a look at autistic tropes which are utilized in horror films to further other, or imply underlying evil, in children.

The Criteria for Evil – Start With Different

If your supporting character or protagonist is evil, there has to be something wrong with them in another way – they cannot be a well-adjusted neurotypical-acting person. Or if they seem that way, there’s an undertone that really, they’re not, and you’ll find out why they’re not later. You know, they have to have the whole big transformation or reveal of the monster that’s really hiding in someone. But there’s always some extra sort of “behavior” or “interest” or body language that tells you, at some point in the film/trailer – this person is weird. This person is not like us. This person is giving off creepy vibes. They don’t seem “safe.” This is when autistic traits are used the most, for telling us that something “may be wrong” with that person – that they’re not really human. In reality, this extends to the idea that if you don’t act “typical,” you are not human. This is what is dangerous about this trailer. It puts violence, difference, and otherness in the same basket, when they shouldn’t even be in the same realm. Neurodiverse people should be able to go see movies that aren’t using them as props to further a dangerous narrative that associates them with being heartless, violent, inhuman creatures, so that audiences can make the leap from “typical child” to “child wrestling with inner spirit/demon that makes him ‘act weird’ and also be evil.” Neurodivergent development is unfortunately a common way in which people introduce a character as potentially bad or evil – because they are different. Although it’s not often labeled, it is very often done. Here’s how it is done in this film:

So, how do you get this “eeriness” in this particular trailer? Well, you have to use some sort of signal to show that this person isn’t human. How do you do that? Use autistic tropes! That will other them enough for your audience.

Have the mom hear that “Miles is having a very difficult time making friends. Miles’s brain is extremely well-developed. He may need a specialist.” Have the mom notice that “He’s so different now” without any specifics. That’s not inherently evil, but it is othering, and “strange” enough to mean bad (at least, to neurotypicals..).

Now, is the evil stuff also in there? Of course, they have to have some evil stuff. Put in Miles walking around with a wrench with eerie music playing. Put in a tool being sharpened without showing who it is (don’t know if it’s Miles’s – but it must be right? He’s supposed to be the evil one in this movie!). Make the boy squish a bug, because killing animals as a child signals evil and lack of empathy and compassion.

This combination of potential evil + autistic trope leans into the common stereotype that autistic people don’t have empathy or compassion whatsoever, and that is why we “act weird” or stare at things or have a “well-developed” brain.. Too many people buy into this idea. I’ve seen two questions about this on twitter within the last two days – people who are unconvinced that any autistic person can feel love or have empathy. Imagine someone assuming, that because you have blonde hair or green eyes, that you can’t love or have empathy? That idea creates discrimination of us at worst, and misunderstandings at best.

Now this is where it gets blurry, as to an “evil signifier:” Put in Miles asking his mom “Mommy, what’s wrong with me?” This is something that many neurodivergent children think about, and ask ourselves for much of our lives. Sometimes, people even ask us what’s wrong with us. If a child asks what is wrong with them, they may feel (or experience life) differently from “the typical person” you grow up around. But here they’re utilizing it as a “tool” to say something really is wrong with him, or bad, or evil.

My first thought by the end of the trailer was – wow, you just put eerie music while watching a neurodivergent kid go about his day and be excluded from things – and then added some weapons in. The only truly evil acts were him squishing a bug (and honestly, don’t many adults kill bugs everyday – though I know autistic people who wouldn’t ever do that, they’d feel too bad).

And yes I know, “it’s a horror movie,” “it’s a trailer,” “you’re not supposed to know yet!” But that is precisely my point. Doesn’t that mean all that people are using to label this child as “creepy” is that his brain is “extremely well-developed,” that he has a hard time making friends, and that [the most damning evidence] he squished a bug in his hand? The use of autistic tropes as scare tactics is a boring and overused concept in horror films. It’s part of a broader message in media that’s made about people who seem isolated or don’t have proper social skills (“loners”), even though this myth has been debunked multiple times. Autistic people are much more likely to be the victims of crimes than the perpetrators. I did have an article to link about this but honestly these crimes against autistic people were too dark and horrible to share.

Even I can see that his long stares are supposed to make him seem “creepy.” But that’s because we’ve portrayed people who stare as “creepy” in most horror films. I zone out all the time! I’ll stare at a spot on a rug. It doesn’t mean I’m contemplating anything, except for trying to listen to what you’re saying. It doesn’t mean I’m evil or that I have no friends. There’s no logic to it. It is simply people’s brains trying to exclude and other people who don’t act like them.

There has been a lot of talk surrounding autistic-coded characters outside of the horror genre, such as in comedy (Abed in Community, and then terribly-written Sheldon in The Big Bang Theory), and in movies (Newt from Fantastic Beasts, and many others). I doubt Prodigy could get much closer to creating Miles as a horror-version of an autistic-coded character, unless the specialist let his mother know “he has autism.” The “otherness” and the mystery behind “what is wrong with Miles” (yes that’s actually how they’re promoting the movie, it’s a real hashtag) is how they’re trying to draw the audience in. No, what’s really going on? He can’t simply be a child who has a hard time making friends and a high IQ and low self-esteem. He has to also want to hurt people, because how else do you make a horror movie? It’s not interesting however to watch a child who makes friends and has a social life then have a demon/spirit in him – that wouldn’t be creepy or weird enough for a horror film. People would have too much empathy for that boy for it to be scary.

Now this next part gets into what I’d call Martyr mom territory. See, there’s this problem where parents of autistic kids will literally abuse them to try to “cure” their autism. In the movie, the mom finds out something is wrong with her son and she wants to fix it. The idea that there is a hidden neurotypical child “underneath” the autistic child is a really damaging one. This is what drives parents of autistic children to abuse them and put them in absurdly stressful situations, just to try to “get them to act normal.” This trope seems apparent, as the specialist tells her that Miles is not like other kids, and then Miles asks what is wrong with him – hinting that yes indeed, something may actually be wrong with him. Rather, not that there’s a huge stigma surrounding people who may develop differently than neurotypical people.

I also saw an article with an interview of the main actor, and she said she liked the script because the mom doesn’t do what everyone expects her to – she fights for her child (she even used the term “mother warrior”). And in this movie, fighting for her child means investigating what is wrong with him and (I’m assuming) probably getting some spirit or demon out of him. And based on the most recent clip that came out (about having “someone in his head”), this is likely to be the case. I’m assuming the ending will either be happy, which means she will get the spirit/whatever else out of her son, and then he will be a “happy” neurotypical son (or at least “make friends” now), or they’ll lean into the horror thing and she can’t save him and bad stuff happens. Neither one is a good way to reinforce that being different is actually okay, and one can be happy while also being different.

Why This Hurts Us

I really wish that people wouldn’t base their assumptions of what autism is based on the media – but unfortunately, they do (just look at the traction The Good Doctor and Atypical have gotten, and the assumptions people make about autistic people based on those characters). Autistic-coded characters are still dangerous to autistic people. They make people think that non-neurotypical development/body language/tone of voice is scary and “mysterious.” And it’s not. We’re just autistic. I really hope you can think of some more creative, and less ableist ways of making horror movies.