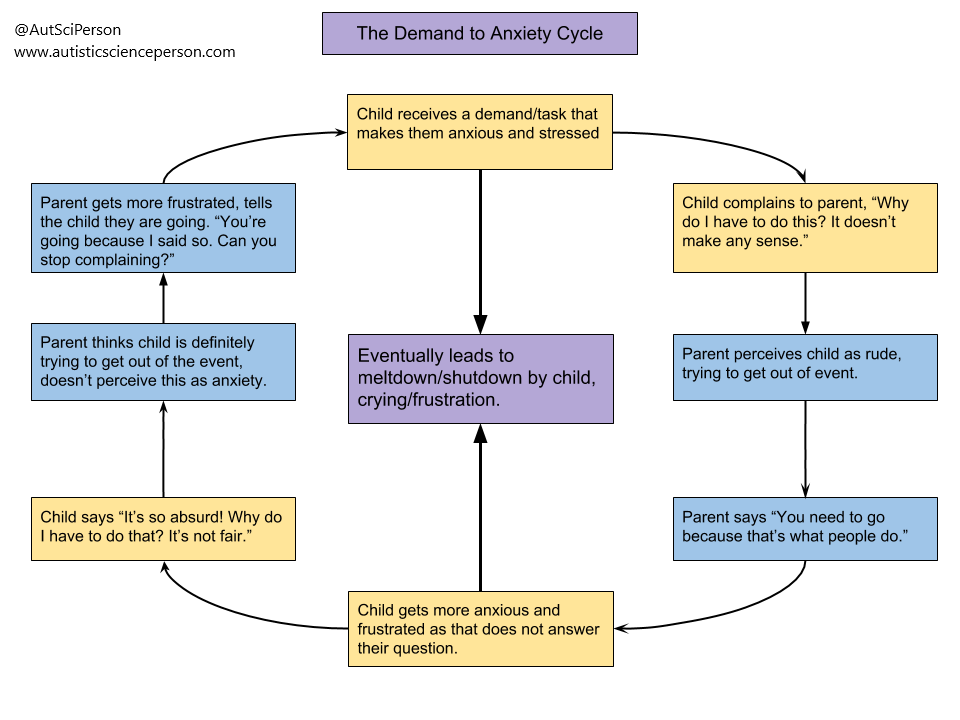 [Disclaimer: This post is targeted towards parents, as I have been seeing a lot of parents recently ask about what to do about their child’s behaviors (trying to figure out what is best for them, and asking autistic people). Similar versions of this can happen as autistic adults, especially when people misinterpret us as complaining or being “defensive.”]
Many parents have a hard time understanding that a misbehaving child is a distressed child.

A misbehaving child is a distressed child.

What anxiety can look like to a parent in their autistic child:

This is what the child is actually feeling (they are not trying to intentionally annoy you or complain or be rude):

For all situations except #4 (which is essentially meltdown territory that requires support and heading the child to a quiet safe place they can calm down in):

Punishments don’t work. That only feeds the anxiety and stress in your child as they are already anxious, which is why they are behaving the way they are. Giving your child choice, even “illusive” choice, is better than making demands. For example, you can tell your child what will happen if they do not do something – but don’t say they have to do it. Telling your child that they have to do something makes them feel like it is a life and death situation – and most of the time, it isn’t! It is not the end of the world if a child doesn’t turn in their homework, or they are late to school because they didn’t put their shoes on. The important thing for you to teach them is emotional regulation and to help them learn that their feelings are valid and real – which well then help them learn to use strategies to calm those emotions. If they do not know what they are feeling (which is very common, as alexithymia is common in autistic people), they will not know they are upset – and this can lead to #4, meltdowns (and shutdowns). As a parent, you can model emotions for them by telling them how you feel. Example: “I feel anxious as I was not able to make dinner for you on time, so I will try to take a few deep breaths and do an activity I enjoy to try to calm down.” Having your child know that it is okay to acknowledge anxiety will allow them to feel less shame about processing that emotion and admitting that to others (as a person who was undiagnosed, I rarely expressed to anyone that I was anxious – in fact my parents were never even aware I was anxious in my childhood. I assumed I wasn’t anxious – mostly because I always was).  Acknowledging anxiety often helps one process and deal with the anxiety itself.

Sometimes, meditation helps people regulate their emotions. Personally this has not been the case for me (and can cause frustration from listening to everything around me). Distraction has often been my best regulation technique – reading something I am interested in, or watching a tv show which lets me pay attention to that, rather than emotions or sensory stimuli. Breathing exercises when upset has helped, mostly with hyperventilation, but for the most part, (if not in a shutdown or meltdown, but pre-shutdown and pre-meltdown), simply having someone ask me about something I’m interested in and letting me talk and ignoring the current emotional situation altogether has helped me the most to calm down. I think of a shutdown as waiting for my brain to calm down, because that is simply all you can do once you are in a shutdown. This thinking has helped me wait it out more calmly, rather than become more anxious and spiral into negative thought cycles, as I am able to separate my logical thinking self from my currently anxious/overwhelmed/petrified brain.

Feel free to comment if you have any other ways you regulate your own emotions, or other ways to deal with preparing for events that make you anxious.