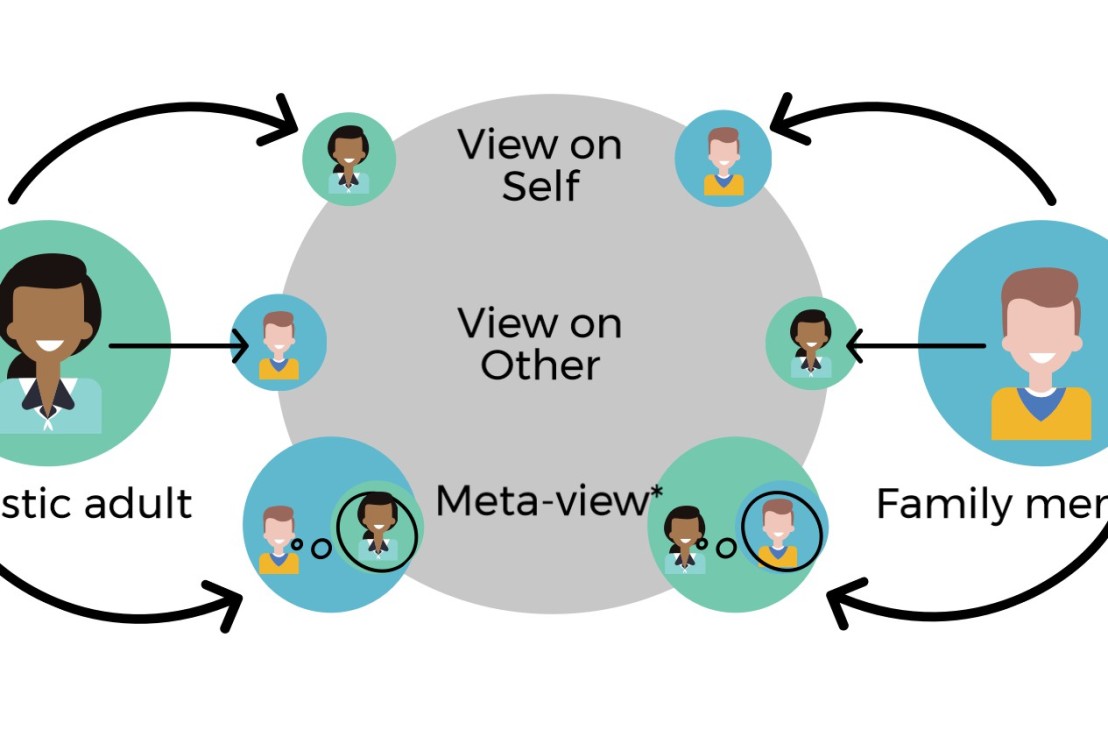 Theory of mind is a bit tough to tackle, even for me. I don’t have a very strong background in cognitive neuroscience, but I know that even within the field it is used very differently between studies. It is presumed that autistic people don’t know how to interact with non-autistic people because they lack “theory of mind” (which is generally thought of by other people as “being able to take someone else’s perspective”), so therefore we don’t know how to we should respond to others in the correct way. I am going to break down why this concept is so flawed and how the theory of mind argument is often used to negate the experiences of autistic people.

There are many problems with this line of thinking.

These are just generalized, fake numbers, but the point still stands. When have non-autistics been tested on their ability to “read” autistic minds? And to understand their processing and their intentions? Very rarely so.

Autistic people have different sensory experiences than non-autistic people do. We have to suppress the urge to turn our head when we hear a sound, or look somewhere else when we see movement or a flashing light. Theory of mind experiments don’t take this into account.

It often surprises neurotypicals when I tell them that I relate more to another autistic person (no matter their traits) than I do to a neurotypical person. They are surprised because I am “so good” at communicating (exhaustively) their way, and trudging through their customs. That is not to say that I do it easily, just as it is not easy for a neurotypical person to understand autistic people’s body language/tone of voice and intentions/emotions, although it is much easier for them to write off their unawareness  of autistic customs by saying we have a “bad theory of mind” which prevents them from understanding us.

The idea that autistic people do not have theory of mind simply because we do not access the neurotypical experience readily and are not invested in the social world is ludicrous. It is like telling a neurotypical they don’t have theory of mind because they can’t hear that buzzing sound next to me, move their facial muscles too much, talk too loud (why can’t they tell my ears are hurting when I blink so much? a clear signal!), and don’t use echolalia to communicate.

This video about the double empathy problem and the accompanying research article highlight some very important and common misconceptions that come into play when people think of autism.

Here are some things that can happen when you tell people (or like me, write about it on social media) that you are autistic.

They somehow assume you are:

immediately more ignorant than you used to be,

immediately more strange, even if your behavior stays completely the same,

very self-centered (everything you now say is assumed to be because you want things to be about you, even if you are trying to be nice),

or they are confused as to how to interact with you, even though they have for weeks/months/years before.

These assumptions many non-autistic people make about us are then bolstered by the “you lack theory of mind” argument. Once coming out as autistic, the idea that you do not have “theory of mind” can be used against you by non-autistic people to reduce the impact of your words, or have them ignored altogether. It is also a way to gaslight your own emotions and the impact others have on how you are treated. It is a way to easily dismiss their own problems and assumptions they have about us, and simply project them onto us instead.

Is it any wonder that non-autistic people hear the words “I’m autistic” and start pitying and/or infantilizing us?

An argument that neurotypical people lack “theory of mind” for autistic people:

They don’t understand that:

Imagine if I rolled my eyes and told them that they simply weren’t smart enough to understand every time they misread me, or replied to them condescendingly (“it’s ok, I don’t expect you to know these things”), or said “that’s ok, you’re only neurotypical.” Imagine if I told them that they were rude and inappropriate whenever they made eye contact during a conversation, or that they weren’t good at interpreting a task literally. Imagine that I used their lack of “theory of mind” as a weapon to negate their neurotype and told them that their behavior was not acceptable, or compared them to a child for smiling at people and making small talk.

I know likely reasons that autistic people look down at the floor – they may be trying to process auditory information better, may be looking at a pattern or something moving on the floor, may be trying to prevent themselves from being overwhelmed from movement of other people around them, or may just be daydreaming and thinking about something else entirely from what was going on in the room, a what-if scenario, or thinking about something they read or are interested in. Of course I’m not saying all autistic people are the same, or that I would read autistic people right all the time, but I’d definitely get much more right compared to reading a neurotypical person. Someone who is not autistic and doesn’t know about autism may not know that moderate sound can actually hurt your ears, or that you can be overwhelmed in a room of 4 people talking quietly, or frustrated by the randomness of some sounds (ticking clock + pen clicking randomly, people shuffling chairs, people breathing), or the buzzing of the lights.

But does that mean that neurotypical people have a theory of mind issue?

(no, and neither do autistic people).

Neurotypicals have a communication and education issue.

We do not have a “theory of mind” issue.

Employers may discriminate against autism without realizing it. The London School of Economics and Political Science.  http://blogs.lse.ac.uk/equityDiversityInclusion/2017/08/employers-may-discriminate-against-autism-without-realising/